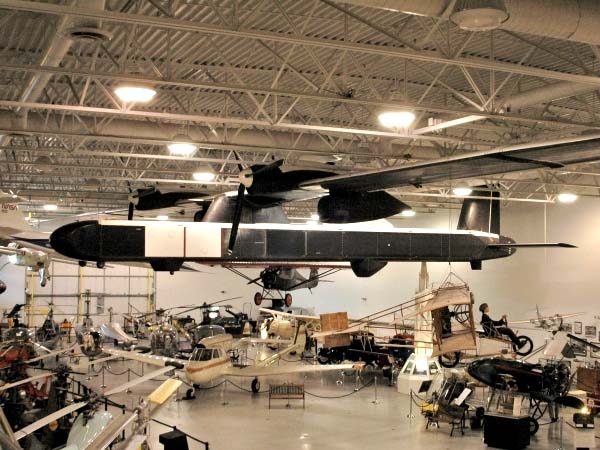 The Boeing Condor was a high tech test bed reconnaissance aircraft built in the late 1980s. With a wing span of over 200 feet, the Condor is larger than either the Boeing 747 or the Boeing B-52 bomber. The Condor had an un-refueled flight duration of 80 hours. It was powered by two 175 hp, six-cylinder opposed, twin supercharged, liquid cooled, Continental TSOL-300-2 engines. One of the Continental engines is on display on the museum’s mezzanine. Remarkably, the aircraft is totally robotic with no pilot. On board computers communicate with computers on the ground via satellite to control all facets of the Condor’s mission.

The Condor set an altitude record for a piston powered aircraft of 67,000 feet, over twelve and a half miles high. The Condor logged over 300 hours of secret missions before its retirement. All of its test flying took place at Moses Lake, Washington.

Very light for its size, the Condor was built of state-of -the-art carbon fiber composite materials, giving the Condor stealth qualities. With a very low radar and heat signature footprint, the Condor was nearly electronically invisible.