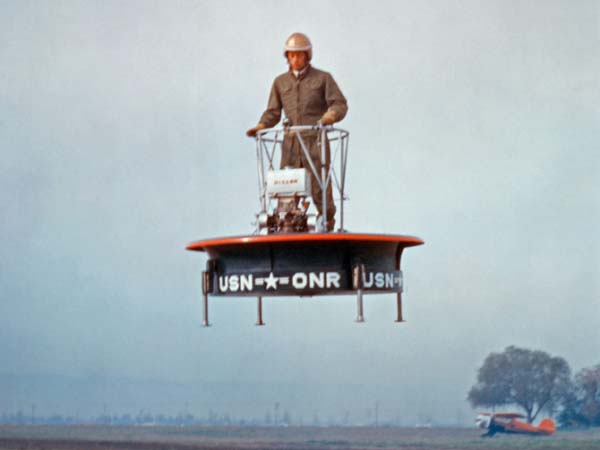 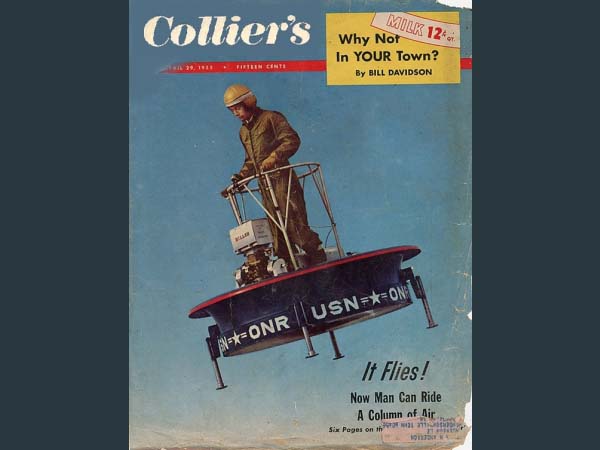 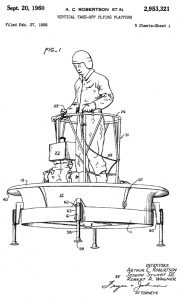 The Hiller Aviation Museum houses some of the most unique flying machines imaginable. One such craft, the Flying Platform, is the prototype developed from National Advisory Committee for Aeronautics (N.A.C.A.) engineer Charles H. Zimmerman’s concept known as the “Flying Shoes”. Charles Zimmerman, to the amusement of his engineering peers, proved the theory that rotors on the top (i.e. helicopters) are inherently unstable. Zimmerman theorized a person’s natural balancing reflexes would suffice in controlling a small flying machine. Charles coined the term “kinesthetic control,” similar to riding a bicycle or balancing a surfboard. 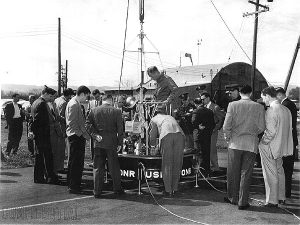 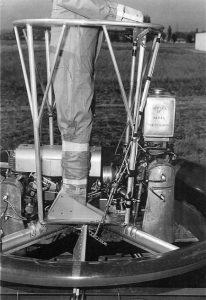 Hiller Helicopters, on 17 September 1953 signed a contract with the Office of Naval Research’s Naval Sciences Division (ONR) to incorporate Alexander Satin’s ducted-fan research with Charles Zimmerman’s “kinesthetic” theories. The classified project was turned over to the ARD at Hiller Aircraft, and construction began in January 1954. Nine months later the ARD group, working in complete secrecy, delivered the prototype model 1031 Flying Platform. The first free flight of the Flying Platform took place on 27 January 1955, and went in the record books as the first time man had flown a ducted fan vertical take off and landing (VTOL) aircraft. In April of 1955 the veil of secrecy was lifted and all the world wanted a vectored thrust vehicle for their own. 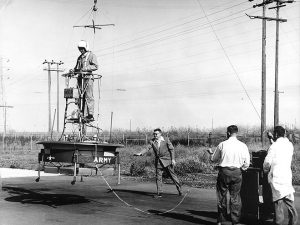 Hiller Helicopters was awarded a U.S. Army contract in 1956 and produced two larger model flying platforms with the Army designation of VZ-1 Pawnee. These vehicles are similar in design but were 8 feet in diameter, 7 feet high, weighted 180lbs empty and the contract required a third Nelson engine installed. The added weight from the third engine severely affected the pilots’ ability to use “kinesthetic” movements for directional control. A modified version of the Pawnee, with a longer duct skirt was designated the VZ-1E, and ended its career at Princeton University as a test vehicle for ducted fan research. 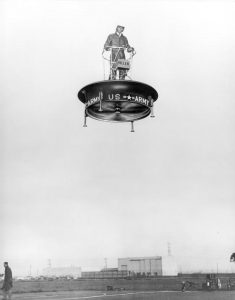 Of the six Flying Platforms that were built, the (ONR) vehicle is on exhibit at the Hiller Aviation Museum, and the National Air & Space Museum has a 1031-A-1. Both platforms may be viewed on line at their respective web-sites. The location of the remaining flying Platforms are unknown. If you have information regarding the disposition or physical location of other Hiller platforms please contact the museum.

“This invention relates generally to ways and means for propelling a person through the air in a controlled flight. More particularly the invention provides a wingless aircraft propelled by thrust reaction and capable of vertical ascent for take off and climbing, hovering in the air, horizontal flight, and vertical descent under such conditions that directional control, and transition from vertical to horizontal flight and vice versa are effected by body movements or balance of the pilot flying the machine.” (A statement from the Patent # 2,953,321)